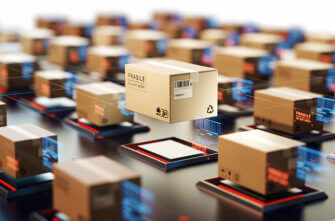 Blockchain technology may be closely associated with cryptocurrency such as Bitcoin, but the technology is also having an impact on the supply chain.

Blockchain is a decentralized distributed ledger using a peer-to-peer (P2P) network, allowing users to add “blocks” logging actions and transactions. To clarify the concept, one recent Coindesk article likened the structure to Wikipedia.

Like Wikipedia, blockchain allows many different individuals to make entries into a record, which is ultimately controlled by the community of users. Because the entries originate from multiple sources, no single individual has domain over the information. Though similarities are apparent, blockchain has a unique digital structure that sets it apart from Wikipedia.

Wikipedia and blockchain both rely on the internet, but the former is based upon a client-server network model. The scheme lets users with certain account permissions alter Wikipedia entries stored on centralized servers. The centralized structure means owners control updates and access to their databases. The distributed database created by blockchain has a different digital makeup than the Wikipedia example; blockchain entries are not controlled by a central party.

Instead of relying on a “master copy” of the records, like Wikipedia does, blockchain networks update independently, resulting in a collective, de facto master. Entries cannot be changed once logged to the database, so eliminating the central authority makes blockchain reliable, secure, and trusted among supply chain stakeholders. Blockchain’s most prominent distinction is that the system is transparent and public, making it less susceptible to corruption or manipulation.

According to Chainalytics contributor, Eric Carlson, blockchain’s biggest contributions to the packaging industry may be felt in three key areas:

The author suggests blockchain technology is poised to experience a rapid adoption rate, as advances continue making it easier to access the technology.

Historically, keeping tabs on packages relied on physical paperwork and security measures traveling with the goods. Blockchain changes the paradigm, enabling packages to communicate with the web, end-users, and the supply chain itself.

Transparency Beyond the Label

Product packaging serves many functions; one of its most important roles is informing consumers. As the call for greater transparency continues gaining momentum, consumer’s thirst for product knowledge and provenance appears unquenchable. It is thought as many as 50 percent of consumers want more information about the products they buy. Responding to the consumer mandate, blockchain is beefing up labeling data, creating more opportunities for producers to connect with buyers.

Label and Narrow Web author, Amy White, recently discussed blockchain in practice. The technology has been adopted by Walmart and major European retailer, Carrefour, attempting to trace goods from farm to shelf. In one noted pilot program undertaken by the US giant, Walmart deployed blockchain technology to track mangoes. Using blockchain technology, the company was able to trace individual mangos to their source farms in just over two seconds. Without the advanced capability, the same task would have taken more than 6 days.

The stakes are high for sellers – White shared a 2018 survey suggesting 75 percent of consumers would be willing to switch brands for in-depth product information, going beyond traditional package labeling. Examples of the way blockchain is being adopted in the marketplace include these developments:

Blockchain technology is adding security and accountability to the supply chain. From tracking and traceability, to transparency and direct consumer engagement, producers and packagers are only beginning to tap blockchain’s untold potential.

Posted in Packaging News and Trends | No Comments »
Request Quote